Without a doubt, its walking that gives The Peak District its popularity, and although on Bank Holidays some beauty spots can be fairly busy, it is still possible for the more adventurous to find oneself in secluded beauty. Walking here is very varied, there are gentle strolls along babbling brooks, or through dry dales (not so in winter), over moors and fells culminating in our higher wilder peaks. High and wild enough to make the use of proper gear and planning essential. To give our visitors a flavour of walking here, we have provided some sample walks and useful links. 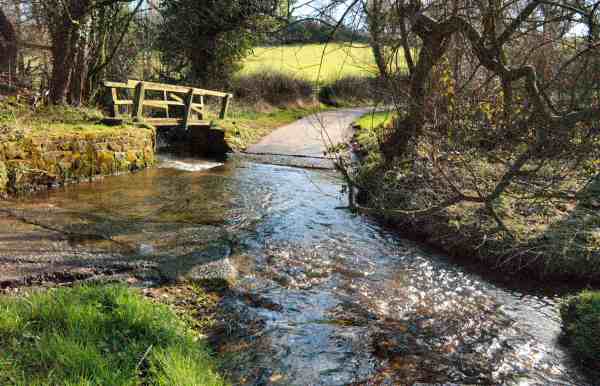 This excellent walk takes you through ‘Strutt Country’, setting off from the Riverside Gardens past North Mill, along the Derwent Valley to Milford, before climbing up to walk along North Road with splendid views of the valley below. The River Derwent flows for more than 50 miles through the heart of Derbyshire. It brings with it the water power to run the mills along its valley. The dam on the right as you cross the bridge over the river at Belper at one time incorporated 12 large water wheels, the housings of which can still be seen. The influence of the Strutt family is at its strongest in Milford. They owned the whole village and employed virtually all the inhabitants of working age. The best place to view Milford is from the top of Sunny Hill where the walk takes you next. From here the walk continues along a pleasant tree lined route across the Chevin before descending gradually back to the river. After retracing your steps to North Mill and calling at the Derwent Valley Visitor Centre, if you have time the River Gardens are well worth exploring.

Length: 6 miles.
Start/finish: The Riverside Gardens Car Park a few yards north of the intersection of the A6 with the A517 Ashbourne road. Location: On the A6 between Derby and Matlock.
Terrain: One steep climb and more gentle descent. Can be wet underfoot. 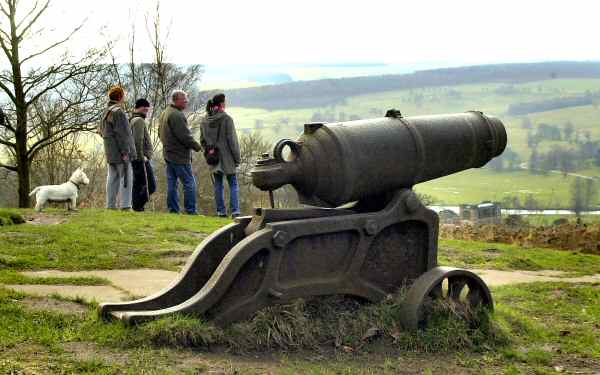 A lovely scenic walk that after leaving Beeley explores the woods high above Chatsworth House, where there are stunning views across the park from the Hunting Tower. After passing close to the House you return along the banks of the River Derwent through Chatsworth Park. From Beeley the path climbs up to Beeley Hilltop Farm and then across the bracken clad hillside on the edge of Beeley Moor, to follow a woodland track high above Chatsworth House and gardens. After passing both the Swiss Lake and the Emperor Lake, you arrive at the Hunting Tower. Elizabethan in construction, it has the most wonderful views over Chatsworth Estate and was used by the ladies of the house to view the hunt when it took place in the park below. The cannon at the base of the house came from a ship that fought at the battle of Trafalgar. Queen Mary’s Bower was a favourite place of relaxation for Mary Queen of Scots when she was held captive at Chatsworth. Her coat of arms can be seen over the gateway. The view of the house and gardens as you walk across the park is unforgettable, even if the Emperor Fountain is not sending up jets of water nearly 300 feet high.

Length: 5.25 miles.
Start/Finish: Calton Lees Car Park.
Location: Leave the A6 south of Bakewell to join the B6012 to Chatsworth. The car park is on the left 200 yards after crossing the bridge into the estate. Terrain: One long steady ascent and descent, otherwise easy walking. 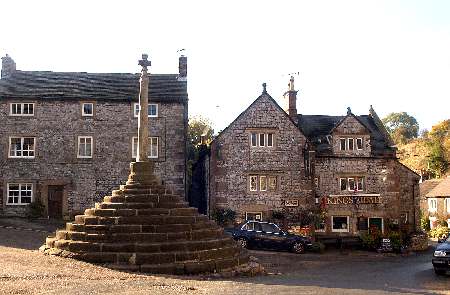 The ancient former lead mining village of Bonsall was once described by the Daily Mail as ‘the healthiest village in England’, because of the long life spans of its inhabitants who were kept fit by climbing its long streets. From The Pig of Lead to the upper end of the village it is a climb of 450 feet. The Pig of Lead public house at the foot of the Via Gellia valley closed a few years ago and is now a private house. Little groups of cottages huddled together on odd plots of land along winding streets add to the charm of this attractive scattered village. The only well known architect to have contributed to Bonsall was Sir Giles Gilbert Scott, who designed Liverpool Cathedral, Battersea power Station, Waterloo Bridge and the telephone kiosk outside the Barley Mow – now a listed building! At the centre of the village is an interesting group of stone houses and the King’s Head a delightful 17th century inn, which surround a much-photographed market cross with a slender circular shaft topped by a ball and surmounted by 13 steps. The old centre of the village was close to the church where many ancient pathways met. An unusual feature of the Parish Church of St James is the presence of a bullring, which was referred to in the following story from the Derbyshire Courier of the 2nd August 1834. In an article about bull baiting, it said, ‘At the Bonsall wakes on Monday last, thirty to forty men had gathered with dogs and clubs….the worthy clergyman remonstrated with the men in vain…..finally he purchased the release of the animal for one guinea!’ Apart from saving the bull, presumably the vicar’s purchase included the bullring itself, which if this story is correct accounts for its presence in the church. 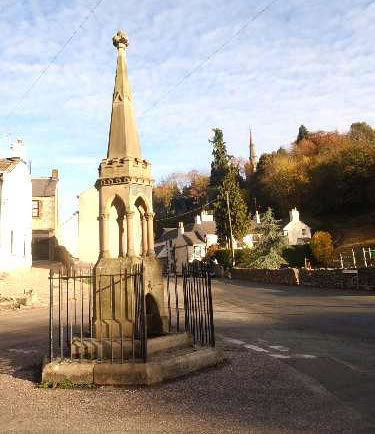 The first Carnival and Well Dressing took place in 1927, although there have been some breaks notably during the Second World War. Wells are now regularly dressed usually on the last Saturday in July. Flowers are very plentiful at that time, ‘only things that grow’ being the traditional rule for well dressing in the village. Bonsall sprang to prominence at the start of the new millennium when a national newspaper proclaimed it has ‘the UFO capital of Britain’. This followed numerous sightings of UFOs over the village by what were considered sober and reliable sources. But it was the six and a half minute video, shot by local residents Sharon and Hayden Rowlands, that gave credibility to the UFO story. They were at home one night watching television, when Sharon spotted a bright light in the sky and rushed outside with her camcorder to record the event. The press got hold of the story and it even reached Los Angeles, where Fox Brothers were reported to have acquired exclusive rights to the film. No documentary has appeared as yet, but UFO enthusiasts from all over the world have visited the village and the landlord of the Barley Mow conducts UFO walks every Bank Holiday Monday for interested parties. The road from Grangemill to Cromford was given the name Via Gellia by the Gell family, who had the road constructed to facilitate easier access from their lead mines to the smelter at Cromford. The trade name Viyella originated from the fabric that was produced at one of the seven textile mills set in the valley. From this point, the centre of the village is reached by the delightfully named Clatterway, which was built by the community to improve trading links, payment being in the form of strong ale. 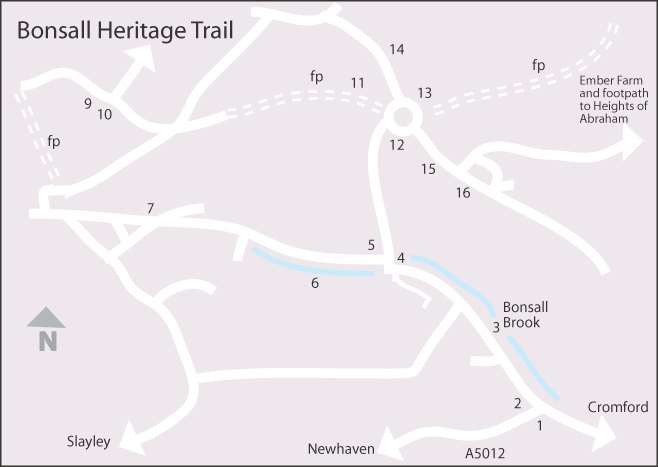